The publication instructions concern native advertising that has a similar layout to the editorial content of the paper.

Fonts and Layout
• The fonts used in the ad must differ markedly from those used in the media where the ad is published.
• Sans-serif fonts must be used in Helsingin Sanomat and Ilta-Sanomat, e.g. Arial or Helvetica.
• The paragraph spacing or paragraph width in a native ad is not specified.

The Word MAINOS ("ADVERTISEMENT")
• Must appear at the top left-hand side and the bottom right-hand side of the border.
• Written in capital letters and with a bold sans-serif font (e.g. Arial Bold / Helvetica Bold).
• Font size 12pt.
• The colour must be black or white, depending on whichever stands out better from the colour of the border.
• Native ads that clearly stand out from editorial content due to e.g. their background colour or image must only include the word MAINOS at the top and bottom, according to the instructions above. A border is not necessary in such cases.

Unclear Cases or a Missing Border

In unclear cases, we ask that the material is submitted for review 24 hours (1 working day) before the material deadline. The editors of the paper will decide whether borders are required or not. If borders are missing in a native ad, the material is returned to the sender so that changes can be made. If the material sender is not reached, Sanoma's material services staff have the right to add borders to the material. In these cases, we use dark grey borders (C0, M0, Y0, K70) and add the word MAINOS in white.

A border and the words MAINOS ("ADVERTISEMENT") must be added to the ad when its content resembles editorial content. 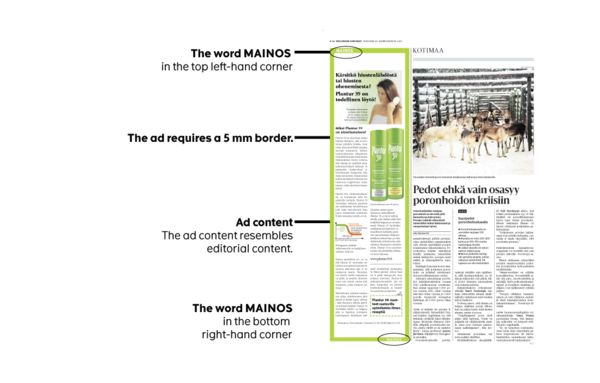 The ad below does not require a border, but only the word MAINOS in the top left-hand and bottom right-hand corners. The colour and image background of the ad distinguish it from editorial content. 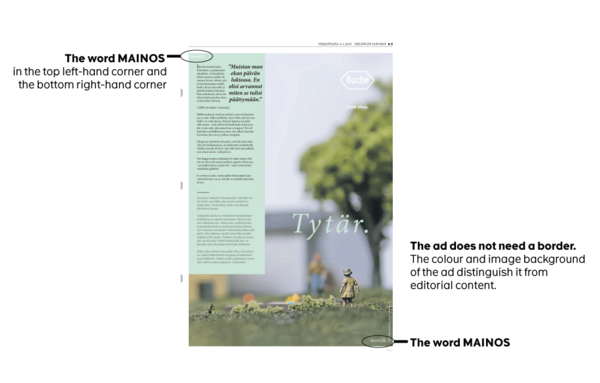 The ad is publishable when the ad already has an image background.

CONTEXT: Clause 16 in the Guidelines for Journalists stipulates that a clear demarcation must be kept between advertising and editorial content and that hidden advertising must be avoided. In 2015, the Council for Mass Media issued a separate recommendation on the separation of journalistic and commercial content. This was inspired by the varying interpretations of the Guidelines for Journalists as the media has begun to use expressions and terms for commercial content that are not clear enough. These inconsistent practices may undermine public confidence towards the media.